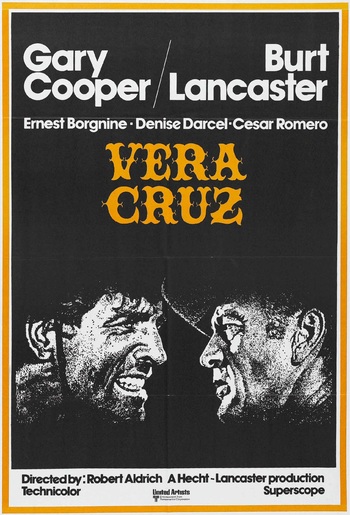 During the Franco-Mexican War, ex-Confederate soldier Ben Trane (Cooper) travels to Mexico seeking a job as a mercenary. There, he meets Joe Erin (Lancaster), a lethal gunslinger and leader of a gang, and they all are recruited by the French to escort the Countess Duvarre (Denise Darcel) to the seaport city of Veracruz. During a river crossing, Trane and Erin notice that the stagecoach in which the countess is traveling is extremely heavy. Erin later discovers that the stagecoach contains six cases of gold coins. The countess informs them that it is worth $3 million which is being transported to pay for troops for Emperor Maximilian's French army. Trane and Erin form an uneasy alliance to steal and split the gold.

Unfortunately for their plans, the man who hired them, the Marquis de Labordere (Cesar Romero), discovers their scheme, and after a group of Juaristas and the rest of Erin's group also suspect that there is more to the expedition, the different groups, including Juarista secret agent Nina (Sara Montiel), conspire to steal the gold for their own purposes. Alliances are formed, quickly dissolved and others are formed.

Although relatively obscure today, Vera Cruz was a major box office hit in its time, making $11 million on a $1.6 million budget. The movie was a major influence on later Westerns which used its storyline of American outlaws or mercenaries traveling to Mexico: The Magnificent Seven, The Professionals and Sergio Leone's Dollars Trilogy all owe a heavy stylistic debt to Aldrich, while Sam Peckinpah's Major Dundee and The Wild Bunch both feature several overt Shout Outs.