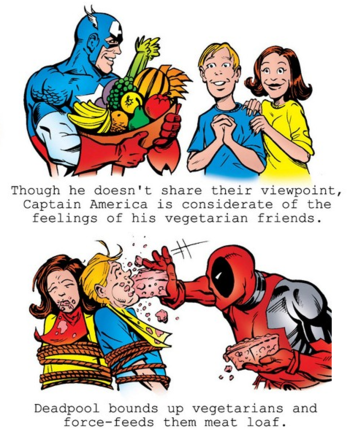 You should see what Deadpool does to little old ladies

...
"And one racist character who is so cartoonishly racist that other racists will watch this movie and say, ‘Well, at least I’m not that racist.’"
— Trailer for White Savior: The Movie, Late Night with Seth Meyers
Advertisement:

Sometimes, especially when writing a story or a script about a highly unusual situation, you find that you've just loaded up your protagonist or some other fairly important character with lots of potentially Unfortunate Implications. Alas, trying to have your character explain to everybody why this is Not What It Looks Like is likely to ruin the flow of the plot, and will probably just make your audience even more suspicious. What can you do?

There are lots of variants. For example, rather than the protagonist, the Deliberately Bad Example may be serving as the backdrop to an important secondary character. Pointing out the differences or similarities between the behavior of the two characters may also serve to raise suspicions rather than allay them. (If the Jerkass doesn't behave like the worst kind of villain, how do we know he isn't really a closeted warm-and-fuzzy type? If he does, how do we know he isn't The Mole?)

Deliberately Bad Examples do of course tend to be rather one-dimensional in their usual roles as the Butt-Monkey or worst villain, but need not always be so. Quite often, if a story lasts long enough and they get enough face time, they may go on to develop personalities of their own and maybe even become a Breakout Character.

This is a sub-trope of the Foil. Compare the more PSA-oriented version of this character-as-a-device, the Anti-Role Model, where the character's purpose is to be an example of what the people in the audience aren't supposed to do. Often a trait of the Card-Carrying Villain. The Wrong Way in the Right Way/Wrong Way Pair may be this, especially if the "right" and "wrong" ways are being contrasted morally. See also Black-and-Gray Morality and A Lighter Shade of Black. Contrast Anti-Hero Substitute (when the writers provide the viewers with an allegedly "Darker and Edgier" and thus "cooler" version of the story's regular protagonist and let things run their course), as well as Parody Sue (a Deliberately Bad Example of a usually moral and upstanding character, in order to better show off how realistically flawed the protagonist is).

A deliberately badly executed example (to glamorize the alternative) would be Too Incompetent to Operate a Blanket.