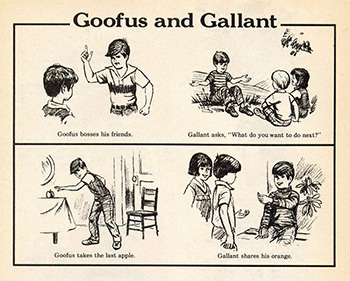 Created in 1948 by Garry Cleveland Myers, "Goofus and Gallant" is a feature in Highlights for Children where a Right Way/Wrong Way Pair of boys named Gallant (good) and Goofus (bad) would teach examples of what is good and bad to do, such as "Goofus bosses his friends. Gallant asks them what they want to do."