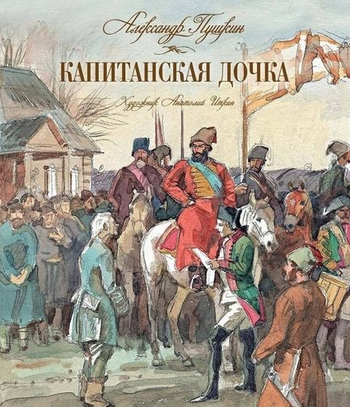 The Captain's Daughter (Rus: Капитанская дочка) is a short Historical Fiction novel by Russian poet and playwright Alexander Pushkin published in 1836. The story concerns a young man named Pyotr Grinyov, who is enlisted in the military by his disciplinarian father and sent to a desolate fort in the corner of Russia. Along the way, however, his kibitka (carriage/sled) is caught in a snow storm and only through the intersession of a Cossack guide do they escape. Pyotr repays the guide for his help by giving him his hare skin pelisse. When Pyotr arrives a his destination, a run-down and inactive fort called Belogorsk, he meets a colorful cast of characters—the foolish Captain Mironov, the shady Shvabrin, and the Captain's pretty daughter, Masha, with whom Pyotr falls in love.

As the story progresses, however, reports come in about the arrival of a Cossack known as Emelyan Pugachov, who claims to be the dead former Tsar, Pyotr III, and has been devastating the countryside around Belogorsk...

But that only scratches the surface of the plot, for there is much more within this story of action and romance.