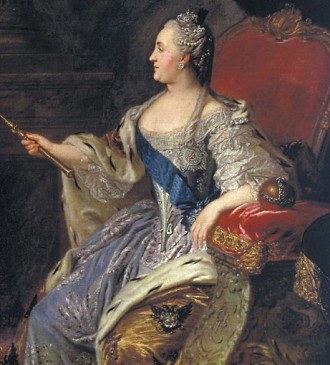 She wasn't actually born part of the Russian royal family (although had some distant relations). She was born Princess Sophie of Anhalt-Zerbst of one of the many principalities of pre-imperial Germany. A marriage was arranged between her and the future Peter III of Russia. After he ascended the throne, some of his reforms and military actions angered the nobility, and they conspired with Catherine to overthrow him, although her reasons were more personal.

She was unable to make all the reforms she wanted, like fixing the serf system in Russia, and she even had to slow down reforms after The French Revolution greatly exceeded the principles of enlightened despotism to the point of rendering it obsolete. While criticising many aspects of Russian society, she was also capable of repressing intellectuals whose criticism of serfdom was too subversive.

Despite the good she did for her country, there were still some bits of slander and libel spread about her, particularly her love life.