Western Animation / Wait Till Your Father Gets Home 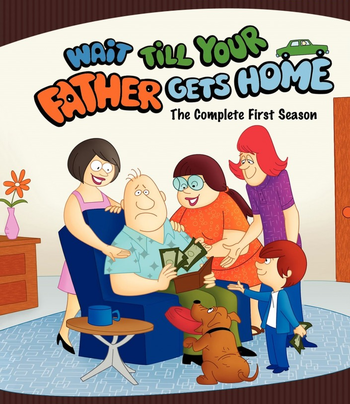 Ladies and gentleman, the most controversial animated television series of The '70s. Before The Simpsons and Family Guy, there was this.

Hanna-Barbera produced this 1972-1974 animated prime time series. Harry Boyle (voiced by a pre-Happy Days Tom Bosley) is a conservative businessman whose elder son, Chet, is a hippie who dropped out of college and does charity work, but won't get a job. His high-school aged daughter, Alice, is a sexually liberated feminist who, despite her weight, isn't afraid to wear skimpy clothes or be interested in sex (much to her parents' shock, who think she's too young and naïve to fully understand sex in the modern age or the fact that not everyone is appreciative of overweight people). Only his younger son, Jamie, shows any signs of sharing Harry's values, and his wife, Irma, stays out of the conflict, though she has dreams of finding her own identity and being more than just a wife and mother.

Meanwhile, his paranoid neighbor Ralph (comedian Jack Burns) masterminds an anti-communist organization so far to the right that they make the John Birchers, Archie Bunker, and (more importantly) Harry look pinko. Convinced of the imminent arrival of the godless Red hordes, Ralph and his followers have turned one end of the block into an armed camp. Poor Harry finds himself forced to navigate his life safely between all the extremes that surround him.

A deft, almost cynical, social commentary disguised as an animated Dom Com, Wait Till Your Father Gets Home had fun skewering targets from all over the social and political spectrum. On a deeper level it satirized the polarization of American society, as viewed through the bewildered eyes of Everyman Harry.

For two years this was Hanna-Barbera's second most popular primetime animated show, and as a result, a number of celebrity guest stars appeared in the second season, including perennial favorites such as Jonathan Winters, Don Knotts, Don Adams and Phyllis Diller.

Though it didn't last as long as The Flintstones, it was the inspiration for a lot of modern-day animated sitcoms also about semi-dysfunctional families trying to cope in a socially and politically unstable America, from The Simpsonsnote which does borrow the show's use of social satire and having celebrities guest star, often as caricatured versions of themselves to King of the Hillnote which is closest to being like Wait Til Your Father Gets Home, as, much like Hank Hill, Harry is a conservative, traditional-minded salesman who has a bespectacled wife who wants to be more than a wife and mother, a son who is often seen as a disappointment, a daughter [or daughter-like family member, as Luanne is Hank's niece] whose sexual openness makes him uncomfortable, a lazy bloodhound for a pet, and a neighbor who's a staunch Conspiracy Theorist, to the Netflix series, F is for Family. Even Seth MacFarlane's shows borrow from Wait Til Your Father Gets Home, albeit on a shallow level, as Harry, Irma, Chet, Alice, Jamie, and Julius the dog are similar to Peter, Lois, Chris, Meg, Stewie, and Brian (Family Guy); Stan, Francine, Hayley, Steve, Roger, Klaus, and Jeff (American Dad!); or Cleveland, Donna, Cleveland Jr., Rallo, and Roberta (The Cleveland Show).