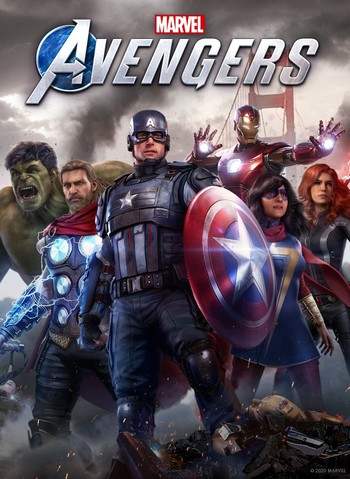 Reassemble.
"Some say they were set up. Others called them murderers. Well, we all lost something that day... But that's not how this story ends!"
— Kamala Khan
Advertisement:

Marvel's Avengers is an Action-Adventure game based off the Marvel Comics property of the same name made by Crystal Dynamics and published by Square Enix. It is an original story set in a distilled world, much in the way of Spider-Man (PS4). It released on PlayStation 4, Xbox One, Google Stadia and Microsoft Windows on September 4, 2020 and on PlayStation 5 and the fourth generation Xbox consoles on March 18, 2021.

A day of triumph for the Avengers instead becomes a tragedy when their new San Francisco headquarters is ground zero for a catastrophic disaster that results in mass casualties, including one of their own. Blamed for the events of "A-Day", the Avengers are outlawed and forced to disband.

In their place, a new organization known as Advanced Idea Mechanics (AIM) emerges, and in the five years since have replaced now-outlawed superheroes with their new A.I. robots. A young girl named Kamala Khan sets out to prove the Avengers' innocence, help reassemble the team, and stop whatever threats head their way.

Numerous superheroes are slated to appear and be playable in the game, with more added post-launch free of charge. Each hero is made to feel unique, and will fill a particular niche.

Not to be confused with LEGO Marvel's Avengers. 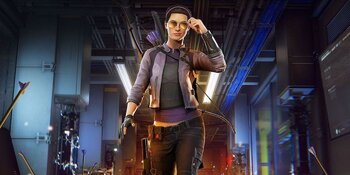 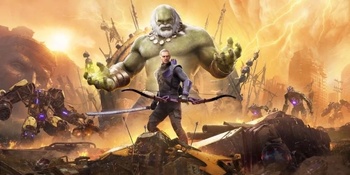 "Well, what are we waiting for?!"
Feedback

Even in his physically unwell state, Tarleton can still put Abomination in his place.

Even in his physically unwell state, Tarleton can still put Abomination in his place.