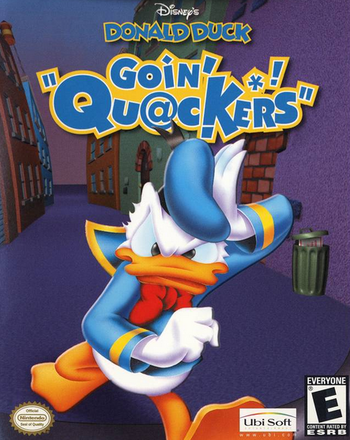 Donald Duck: Goin' Qu@ckers (Quack Attack in Europe) is a Donald Duck game made by Ubisoft in 2000, in dedication to Carl Barks, who had passed away a short time earlier. It was originally released for the Nintendo 64, Sega Dreamcast, Sony PlayStation, and PC. The Game Boy Color and the Game Boy Advance got 2D versions of the game, and later a remake was made for the PlayStation 2 and the GameCube.

When Daisy, who is a reporter as in Quack Pack, is spying on Merlock's evil plans, she's captured. Donald has to travel around the world to set antennas which will power Gyro's teleporter and allow him to reach the temple in which she's imprisoned. Gladstone also appears in the story and, oddly, he's quite unlucky and a Butt-Monkey.

Gameplay is basically a Crash Bandicoot clone made for kids. Where you, as Donald, are going through linear 3D and 2D platformer levels. The main objective is not just to reach the end however, as you also need to collect Boss Pad in all levels in each world to unlock that world's boss level. There's also Donald's nephews' toys to collect for a bonus fifth level, and beating Gladstone's Time Attack for unlocking new costumes for Donald.

Quackin' tropes in this game include: