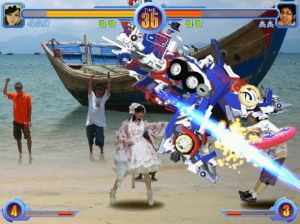 Hey, guys! C'mon!
"My personal favorite super belongs to the dainty umbrella-wielding Mian Hua Tang: she calls out to her manservant, ordering him to attack. (Relevant: her manservant is Optimus Prime.)"
— PC Gamer

More accurately translatable to Dong Dong: the Immortal Legend (Chinese: 东东不死传说), Dong Dong Never Die is a Fighting Game that defies all but the heartiest attempts at description. Suffice it to say that just before its destruction, SkyNet sends a more advanced Terminator — the nigh-invulnerable, gun-wielding, super-strong, and water-drinking Sheng Hua Nan — to the past. In response, the leader of the human resistance, Dong Dong, sends back a T-800 Model Terminator that he has reprogrammed to protect his past self. Both Terminators arrive at a time when fighting representatives from all parts of China such as Sun Wukong with a spray paint can, some guy with a huge afro and an inner-tube, and Mario gather together and-

Yes, that's all really part of the plot.

A product of an enthusiastic but rather handicapped era for Chinese game developers, Dong Dong Never Die shamelessly lifts plots, characters, and everything else from all sections of pop culture and blends them into a ridiculous, hilarious, unbalanced, and surprisingly fun fighting game. Instead of drawn sprites, the developers took thousands of photographs and chained them together to create the game's sprites, creating an uncanny yet bizarrely hilarious "artstyle". It's free to download, and is one of the few places where you can have Zhuge Liang order a volley of arrows against a Terminator who celebrates his victory by drinking a bottle of water and singing "I Believe I Can Fly."

Giant Bomb took at look at it here,

Super Bunnyhop took their crack at it here,

, Yo Videogames tried it out here

and Joel from Vinesauce streamed (and fell in love with) it, as partly shown here

. A quick look at it can be found here