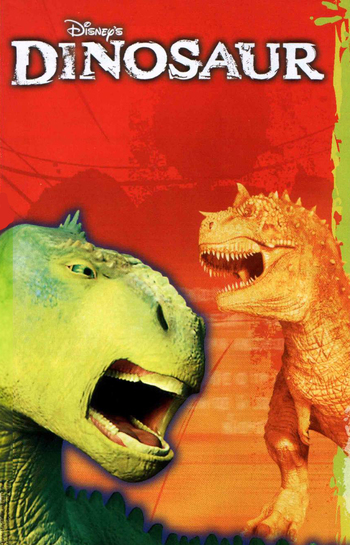 "You are Aladar..."note And Zini and Flia too!

Dinosaur is a series of video games based on the 2000 Disney film Dinosaur.

The games follow the basic plot of the movie; the heroic Iguanodon Aladar and his family are forced to leave their peaceful island home when a meteor shower destroys it. They join a herd of survivors on their way to the haven of the Nesting Grounds, and become True Companions with the elderly members of the herd. Aladar and his family have to not only contend with Kron, the herd's stubborn leader, but also the various predators and natural obstacles that make their migration to the Nesting Grounds a difficult one.

Though the games follow the basic plot of the film, they are not without their differences. Expect Adaptation Expansion and Adapted Out to be used, and the games also feature prehistoric creatures not seen in the film. The most notable addition to the game is Flia, a Pteranodon who is part of Aladar's family from the beginning, and an original character loosely based on the Pteranodon seen in the film's opening sequence.

Each character has a special set of skills that can depend on the platform; for example, Aladar is the most physically powerful member of the trio, Zini is the only one who can collect fruit, and Flia is the fastest thanks to her flight and can scout an area quickly.

Tropes featured in the game include: