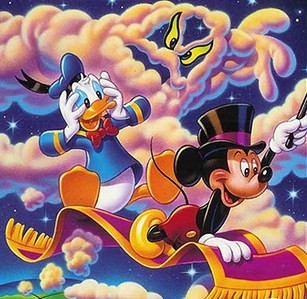 World of Illusion: Starring Mickey Mouse & Donald Duck is the 1992 sequel to Castle of Illusion developed once again by Sega. It featured the titular duo being trapped in a magical world and their attempt to escape.

The story begins with Mickey and Donald practicing for their upcoming magic show. Donald accidentally stumbles into a mysterious box and proceeds to investigate further despite Mickey's reservations. The two step into the box and find themselves sucked into a strange land. An evil wizard informs them they have fallen into his trap and must learn a few new tricks if they are to stand a chance of finding and defeating him. And so the duo battle their way through Disney inspired lanscapes to try and find a way home.

Gameplay was similar to the Castle of Illusion but without throwing projectiles and featuring co-operative play, more levels, better sound and graphics. Able to play as either Mickey or Donald solo, the game was actually slighty different depending on what character the player chose to control (Donald's solo levels are a bit harder than Mickey's solo levels). It even had unique co-op sections (2-player mode only).

World of Illusion is also the first video game in which Mickey and Donald are both voiced, by Disney regulars Wayne Allwine and Tony Anselmo no less, even though the only things they say are, "Alakazam!", "Ouch!" and "Wow!"

World of Illusion, along with Castle of Illusion, was included as one of the games in the Sega Genesis Mini, which was released in 2019.