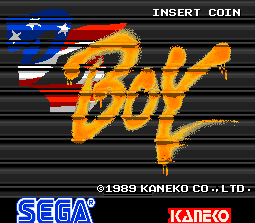 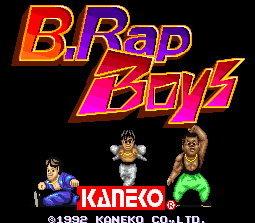 DJ Boy is a series of two video games developed Kaneko between 1989-1992 in the side-scrolling Beat 'em Up genre. Both games are based around The Golden Age of Hip Hop culture in the USA during the late Eighties and early Nineties. Both games also have Excuse Plots, though the original DJ Boy's story differed depending on which platform you were on.

In the original arcade version, Bob and his friend Tom are just breakdancing to the sounds of their boombox when a gang of thieves (known as the Dark Knights in the home versions) attack them and rob them of their boombox. The two teenagers then chase the thieves across their city to get their boombox back, while fighting all kinds of wacky enemies along the way.

The Sega Genesis version has a different story entirely: Donald J. Boy (really just Bob with a new name), a popular breakdancer and fighter, is preparing to enter a fight-race known as "Rollergame" in Cigaretch City, located on the outskirts of New York City. However, the Dark Knights want him out of the competition, and kidnap his girlfriend Maria. Their leader then offers an ultimatum: Either leave the Rollergame, or never see Maria again. DJ Boy, undaunted, must beat the Rollergame and save Maria all in one go.

Published by Sega for arcades in Japan and on the Genesis internationally, and by Sammy in North America,note  Fifteen years before Sega and Sammy had merged into SegaSammy Holdings DJ Boy was quickly Bowdlerized in North America, and for very good reason: the game had an insane amount of racial caricatures, with one memorable one being "Big Mamma": An overweight black woman with extremely dark skin and big red lips, resembling both the Mammy and Blackface caricatures. The North American arcade and Genesis ports significantly lightened her skin to make it look less obvious she was a blackface sterotype. The arcade version also featured Wolfman Jack or Demon Kogure as the narrator, depending on your region.

In 1992, Kaneko released B.Rap Boys as a sequel to DJ Boy. Although it's not a direct sequel (neither Bob, Tom or Donald appear), it takes place in the same universe, and features a similar plot to the console port of DJ Boy: The protagonist(s) is on his way to fight the champion of "Death Match", and ends up fighting rival gangs on the way there. B.Rap Boys also ratchets up the wackiness and already brutal difficulty of DJ Boy to a much higher level. It was also notable for being one of the first video games to have an entirely lyricized (and licensed!) hip hop soundtrack, with some of the songs being slight remixes of tracks performed by the early 90s rap group 3 Stories High, from their Japanese album release Famous Last Words.

While the games have mostly fallen into obscurity, DJ Boy is often considered to be the Spiritual Ancestor to both the Streets of Rage and Jet Set Radio video games.

Both games feature examples of: