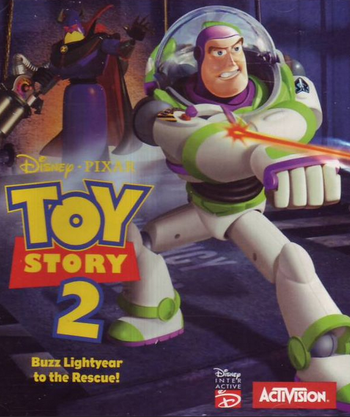 A Licensed Game based on the movie, Toy Story 2, developed by Traveller's Tales and published by Activision and Disney Interactive Studios for the PlayStation and Nintendo 64 in 1999. Ports for the Sega Dreamcast and PC were released one year later, and an eight-bit version was developed by Tiertex Design Studios and published by THQ for the Game Boy Color in 1999.
Advertisement:

The game stars Buzz Lightyear in his quest to rescue Woody, who has been kidnapped by Al McWhiggin (of Al's Toy Barn fame) at a garage sale.

To progress through the game, Buzz has to collect Pizza Planet tokens, which can be obtained from completing challenges from his friends. There are five worlds, each having two action stages and one boss stage. Each action stage has five objectives to complete; Collect 50 coins for Hamm, find five objects or characters hidden across the level, participate in an event that involves either racing against someone or clearing a goal within a time limit, defeat a mini-boss located in the level, and clear a hidden objective, such as solving a puzzle.