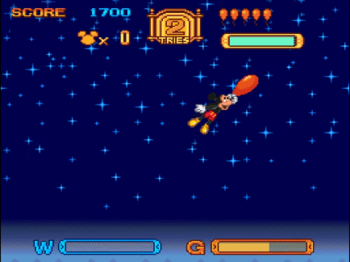 Mickey takes to the stars with his beautiful balloon.

Mickey takes a trip to Tokyo Disneyland, but when he arrives, Minnie informs him that all of his buddies have been kidnapped, and the park has been taken over by none other than his nemesis, the trouble-making Pete. Mickey grabs a dual helium/water pack and a bunch of balloons, and sets off on an adventure spanning across the park's attractions to rescue his friends.

The game plays like a typical 2D platformer. You take control of Mickey as he explores the different attractions around Tokyo Disneyland, but what makes this gameplay stand out is the balloon mechanic. Mickey is armed with balloons, which are actually really effective in practice. Water Balloons are your chief primary throwing weapon, while Air Balloons allow Mickey to attack foes above him, but they're more useful for hovering and flying. Both kinds play a big role in the game, as they're also required for getting around obstacles and solving puzzles.

See also Adventures In The Magic Kingdom, a similar Disney licensed game that involves exploring a Disney theme park with many attractions.