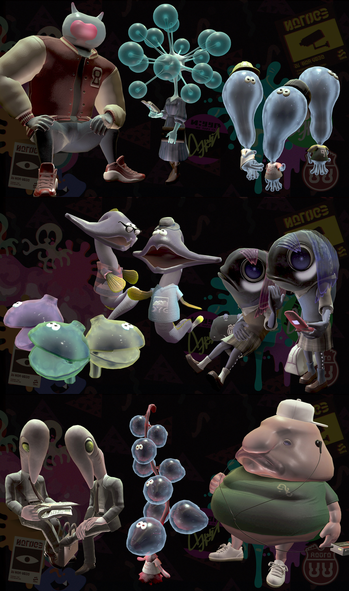 Animal characters in fiction run the gamut. Just a look at the listing in Animal Stereotypes shows that there are plenty of common-enough animals that are used for their distinctive traits (presumed or real).

Then there's the Seldom-Seen Species — that is, a species that, once you see it, makes you think, "Hey, you don't usually see that animal!"note assuming you're even familiar with it. In some cases, this may be a forced attempt to avoid the countless existing Animal Stereotypes.

This trope is a Cyclic Trope because some species are more seldom seen in the media of some cultures, in certain forms of media, and in some time periods than others. For example, red pandas are common in Furry Fandom artwork, but are seldom seen in other fictional works and media. Likewise, platypuses were once considered a strange and unfamiliar animal, and were used as an example of a "seldom-seen species", but now they are so famous that they no longer count as one.

Many of the older examples of this trope look and act little (if not nothing) like their real-life equivalents.

Examples of this trope should be species that are still seldom seen in media nowadays. Examples of older works that show species that were rare in media at the time of the work's release but not that obscure now are also allowed. As a general rule, if the species in question has appeared more than ten times in fiction in the past ten years, it isn't "seldom seen."

Contrast Small Taxonomy Pools. For obscure mythological beasts in fiction, see Minorly Mentioned Myths and Monsters. See The Greatest History Never Told for historical periods that are obscure or unknown to general audiences. May also count as Aluminum Christmas Trees if the audience thinks the species are fictional.