Literature / The Age of Misrule 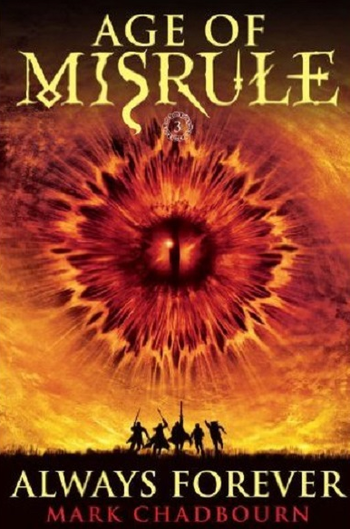 The Age of Misrule is an Urban Fantasy series by Mark Chadbourn which consists of a trilogy of trilogies.
Advertisement:

Cast your mind back to January of 2000. Remember that note in the Fortean Times about paranormal phenomena taking a sudden spike? And weird shapeshifters screwing with the power supply? And the dragon destroying London? You don't? Well, sit a spell...

Once upon a time, the world was all magicky and stuff. Existence was ruled over by the wise, powerful, benevolent-yet-occaisionally-sadistic race called the Golden Ones. Then, from the edge of reality came a race of nihilistic shapeshiftery things called the Fomorians. Wackiness ensued. No, not that kind of wackiness.

Somewhere in the middle of this, humans became aware of the fact that they could do cool stuff (unfortunately, the Golden Ones and the Fomorians were quite convinced that The World Was Not Ready and were happy to kill people to be sure it stayed that way). Eventually, the Golden Ones and the Fomorians agree to leave the Earth behind and go off to the Otherworld, where they agree to not kill each other. Taking the monsters of myth and most of the cool magic swords with them, and leaving mankind to outgrow its magical and intuitive leanings, and learn about, you know, logic and strip-mining and stuff.

Which brings us up to 2000. For no apparent reason, all the magic monsters come back to Earth. The Golden Ones are prepared to lead humanity into its glorious future as a race of divine star-gods (or to drug us and rape our corpses. They tend to be, you know, down for whatever). The Fomorians activate the Wish-Hex, which locks out the Golden Ones and leaves the Fomorians free to drug us and rape our corpses.

The only people who can save the day are the Brothers and Sisters of Dragons, a Five-Man Band with magic powers (assisted in some of the books by an old hippy called Tom - a ''really'' old hippy) and some truly messed-up backstories. They have to assemble the Plot Coupons that will bring out the race they know as the Tuatha de Danann - the Golden Ones - who seem like the better deal. Just not by much.

You can't bring back the gods and demons of Celtic Mythology without a few side-effects, though. Cue rolling blackouts, alien abductions, lycanthropes, spooky visitations, psychopathic goblins... oh, and a guy called Balor, aka the End of Existence.

A few years later, After the End, a second lot of Brothers and Sisters are called upon to fight the Lament-Brood, a gang of nihilistic shapeshifters who suck all the confidence out of their opponents, who happen to be backed up by an army of zombified gods. Teaming up with the remains of the British government, the Lament-Brood commission a device which taps into the newfound magic's inherent ability to rewrite reality, to turn the world into, well, Real Life (circa 2006, anyway). No zombie gods, no sadistic higher beings, no impending magical apocalypse... but on the other hand, no radical growth, no magic powers and no wonderful toys.

But salvation is at hand, in the form of Jack 'Church' Churchill, an archeologist/writer from London, who thanks to the wonders of Timey-Wimey Ball metaphysics is responsible for the legend of Jack the Giant Killer, and is on a quest to break the spell, while avoiding an entity called the Spider.