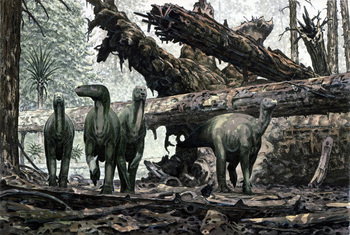 clade of dinosaurs are some of the most prominent and famous when it comes to the public's eye. The Ornithopods were some of the most successful dinosaurs during their time living out from the Middle Jurassic all the way to the end of the Cretaceous. They were herbivores as can be judged by studies conducted by palaeontologists.

What is one of the best-known traits of Ornithopods are their general social nature. Generally, it is rather usual to find remains of ornithopods with a few others around it. This indicated that they were animals that usually preferred to form groups with one another, mainly as protection.

Naturally, as dinosaurs are a mainstay in popular culture, ornithopods, especially Hypsilophodon, Iguanodon and Parasaurolophus tend to be featured in works focusing on Prehistory. To highlight their nature as peaceful herbivores, they will mostly be seen as herd animals, providing protection and social attachments towards each other and being rather protective of them. Additionally, it is also common to see ornithopods form a herd composed of different herbivorous dinosaur species, such as sauropods, ceratopsians, stegosaurs, pachycephalosaurs and ankylosaurs.

As evidence to suggest their nature as herd animals have been hinted at by fossil evidence, this can be Truth in Television. One of the best evidence to support this is the hadrosaur Maiasaura, whose remains were discovered around a nesting ground with parents perched around said nests. This was what gave it its name, which means Good Mother Lizard and it may be one of the main inspirations for how ornithopods, usually hadrosaurs tend to be depicted as sociable and gentle creatures. Depending on how much remains are uncovered, this may also overlap with Artistic License – Paleontology. This can also fall under Stock Dinosaurs depending on the species shown, especially the aforementioned Iguanodon and Parasaurolophus, or Seldom-Seen Species if a prehistoric setting happens to be set as a specific time frame and location.

While not as common as Sauropods, ornithopods are still possible to be Domesticated Dinosaurs considering how they are viewed as peaceful animals. This may or may not overlap with Dumb Dinos, though this may be unlikely, considering that ornithopods are normally shown to be very wary about predators.

Sometimes portrayed as a Fantastic Fauna Counterpart to deer and antelope in the dinosaur age.

Compare Gentle Giant Sauropod where sauropods are shown to be docile and friendly. Similarly, compare Herbivores Are Friendly as ornithopods are usually shown to be non-threatening animals in the long-run. Contrast Tough Armored Dinosaur, Headbutting Pachy, and Temper-Ceratops which depict herbivorous dinosaur clades as territorial and brutish, alongside Raptor Attack and Ptero Soarer which serve to portray raptors and pterosaurs by exaggerating their size and/or aggressive nature. Also contrast Prehistoric Monster where every prehistoric animal, regardless of diet, is depicted as a stereotypical monster rather than an actual animal. Aquatic Hadrosaurs can be a subtrope, as hadrosaurs are a kind of ornithopods.