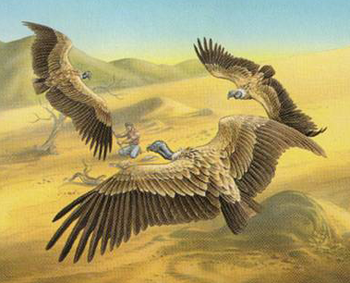 "If you are alone in the desert and see vultures perched above you, your first thought is never, 'Oh thank God, the vultures are coming to help.'"
— John Oliver, Last Week Tonight with John Oliver
Advertisement:

In fiction, when a character, especially one wandering through a Thirsty Desert, seems on the brink of death, vultures may be seen circling overhead or perching menacingly nearby, waiting for their prey to collapse and die. It's like a visual shorthand for the natural world itself saying If You Die, I Call Your Stuff.

Despite the trope name, the birds don't necessarily have to be vultures — crows and ravens are often used to provide much the same effect. However, as vultures do intentionally prefer scavenging, it just fits the scenario more.

In Real Life, vultures (and other large birds) do circle, but it's related to how they fly instead of being strictly part of their hunting methods. Gaining height in flight requires a lot of energy, and large birds rely on riding thermals, columns of rising hot air, to save their strength.

Not to be confused with Circling Birdies even though vultures are birds. See also Kidnapping Bird of Prey, for when the bird goes after the character while they're still alive. More often than not, these will be some of the only living things to keep you company in the Sea of Sand.

Compare and contrast Vile Vulture where individual vultures are depicted as villains.