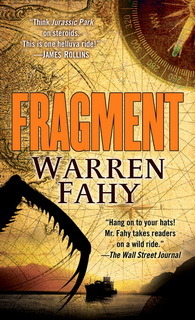 Henders Island is not a lost world frozen in time, an island of mutants, or a lab where science has gone mad. This is the Earth as it might have been after evolving separately for half a billion years, an ecosystem that could topple ours like a house of cards.
Advertisement:

is a 2009 s-f novel by Warren Fahy, described by one reviewer as "an eco-thriller with teeth."

A group of scientists on the reality show Sea Life discover a distress signal from a near uncharted island in the South Pacific. Called Henders Island, the island itself is poorly known, and no one has ever reported exploring the interior of the island. The crew land on the island not only with the hope of rescuing whoever sent the signal, but also possibly discovering new species of plants and animals (and in one case, pumping ratings back into the failing show).

They soon find out why no one has ever explored Henders Island.

Naturally, the military gets involved, and the U.S. attempt to study the island, bringing in not only the only two survivors of the Sea Life expedition to the island, but two scientists from the mainland. One is a rather nice guy with the token unusual theory which gets proven over the course of the book, while the other is a popular doom-saying scientist who does things more for the money than For Science!. Eventually, the island's fauna is determined to be too dangerous, and the government nukes the place. But not before the protagonists discover sentient life on the island, and have to get it off the island and into safety before the above money-hungry scientist has them killed to render his theories unfalsifiable.

Has a sequel called Pandemonium, which deals with another isolated hostile ecosystem, this time in an enormous cave in Russia, as well as the survival of organisms from Henders Island in the underground city nearby. A third book is planned.