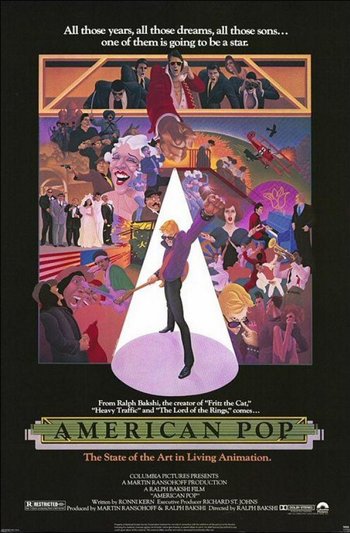 American Pop is a 1981 animated film directed by Ralph Bakshi, the maker of Fritz the Cat, Heavy Traffic and the animated The Lord of the Rings. The screenplay was written by Ronni Kern.

In contrast to most Bakshi works, American Pop is a fairly realistically grounded drama that focuses on the lineage of a family closely involved with the history of American popular music, from Swing and Jazz to Pop, Rock, and Punk. Though it's a different type of story than those that Bakshi is usually associated with (street dramas and fantasy films), it does exemplify Bakshi's unique vision for animation as a medium that could be used to tell any story, and in making a mature drama aimed at adult audiences, American Pop definitely breaks away from the perception that All Animation Is Disney. To this end, Bakshi was successful in making a film that can be appreciated by any viewer, not just those that are typically fans of animation.

The story is a Generational Saga starting at the turn of the 20th century, offering a perspective on the different styles of music, as well as the family line that takes a strong involvement in the creation of this music, beginning with a Jewish Mother and her son Zalmie (Jeffrey Lippa) escaping from a pogrom. The son begins working for Louie (Jerry Holland), a comedian at a burlesque house, and she dies in a sweatshop fire. The kid later marries a stripper named Bella (Lisa Jane Persky) and becomes involved with the mob, which continues to be associated with this family until the 1950s, when his grandson Tony (Ron Thompson) involves himself in Beat culture and later writes lyrics for a Psychedelic Rock band — and fathering Pete (Thompson), a blond-haired, blue-eyed son with a waitress in Kansas who will eventually accomplish what all the others in his family could not.

You might recognize several scenes from this film via Kanye West's music video "Heartless", which copied this film and its Rotoscoped animation as a tribute. The film itself contains a Crowning Soundtrack Of Awesome, with songs by Janis Joplin, The Doors, George Gershwin, Herbie Hancock, The Mamas & the Papas, Lou Reed, Louis Prima, Pat Benatar and Jimi Hendrix. Not to mention, Bob Dylan songs are portrayed within the context of the story as being written by one of the main characters. American Pop is one of Bakshi's most acclaimed films as the result of its mature story, and its use of music.