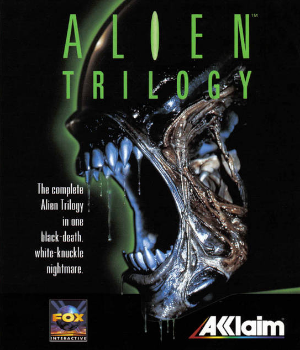 Alien Trilogy is a 1996 First-Person Shooter for the PC, Playstation, and Sega Saturn, loosely based on the first three films in the Alien franchise. The game is highly reminiscent of Doom, and follows the adventures of Ellen Ripley (who seems to be a Colonial Marine rather than a civilian consultant) as she battles her way through the LV-426 colony while fighting the Aliens as well as insane infected colonists and evil Weyland-Yutani mercenaries. Overall the game follows a Broad Strokes version of the plot of Aliens while including weapons and enemies seen in Alien and Alien³.

The game notably has fully 3D-rendered environments as well as items such as weapon or health pickups, although the actual weapon and enemy models are the typical Doom-style 2D sprites of the time period. It features 23 levels spread across 3 episodes, taking place in the LV-426 colony, a nearby prison facility (based on Fury-161 from Alien 3), and finally the crashed Engineer ship.