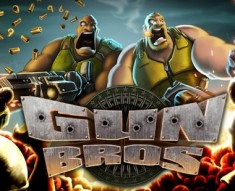 Gun Bros is a 2010 Top-Down Shoot 'em Up available for free on phones running iOS or Android. A lower-quality version can be found on Facebook. A sequel was also released in 2013.

It's The Future, and the evil forces of T.O.O.L. are on a mission of galactic conquest! But never fear, the Gun Bros, agents of F.R.A.G.G.E.D., are on the job, huge guns in hand and cigar chomped firmly in mouth.

The player controls either Percy Gun or Francis Gun and proceeds to lay waste to hordes of Mooks, accompanied by the AI using whichever brother not picked. The player uses twin touch-based "thumbsticks" to control movement and shooting, respectively. The player can equip two different guns and switch between them at will, and use "Smartillery" powerups when things get ugly.

The game is divided up into waves, 50 per mission, or "revolution". Each world contains multiple revolutions, and there are multiple worlds. Each successive wave, revolution or world yields greater rewards but also tougher foes. You earn Experience Points and glowing purple Xplodium crystals as you play. Leveling Up increases your maximum health, and you can increase the Xplodium you receive by clearing waves without taking any damage, thus increasing your "Xplodium multiplier". Dying resets this multiplier but not your overall progress- you can begin from the last wave you reached. When you return to the menu, you can then refine your Xplodium for cash to purchase new guns, armor and powerups.

The game can be connected to your Facebook account, which allows you to recruit your friends' Bros to aid you in battle, thus replacing the default AI bro who is stuck with starting gear. Doing so also earns you bonuses. There are also daily challenges for rewards, asking that you Play Every Day.