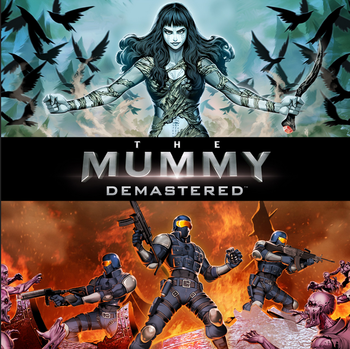 The Mummy Demastered is a licensed Metroidvania game based on the film The Mummy (2017), developed by WayForward Technologies.

The player takes role of an agent working for the organization known as Prodigium, who is chasing after Ahmanet, a resurrected Egyptian Princess who is planning to unleash her brand of evil all over the world. In this endeavor, they are assisted by Dr. Henry Jekyll, who guides them through London and against the army of the undead that the princess commands.

The main gimmick of the game comes in if the agent dies- upon which they are turned into an Undead Agent. Prodigum will then send an identical agent to the last save point, but they will have to kill the Undead Agent in the room they died in for the player to get back their upgrades.

The Mummy Demastered contains examples of: