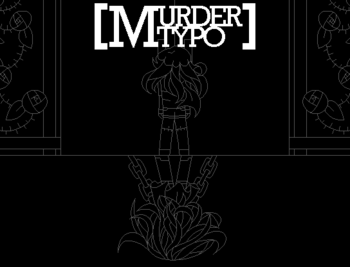 is an indie RPG game developed by tumblr user emeraldradation

using RPG Maker VX Ace. Kara wrote, drew the art, composed the music, and worked on the entire mechanics of the game on her own.

Murder Typo is described as a fantasy-adventure game, where you play as the MC, designed to save their session from their downfall. The first demo was released on June 17th, 2016 and the redesigned demo was released on February 21st, 2017. The newer demo includes better flow, dialogue, game mechanics and another floor added to the game play. The full game's release date is unknown.

“You awaken in a black and white world with no memories and no name. Your only identification is that you are The MC, and it’s been prophesied that you will save this world, Session Violet, from its current ruin following a civil war. However, world peace is a large job for one person, and you’re never sure who you can trust.”

Tropes featured in Murder Typo include: