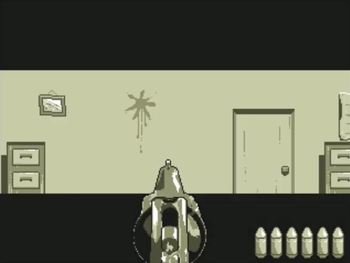 Hello! Welcome to Chalfont, Chalfont, and Chalfont, Incorporated. We've been waiting for you- the temp agency that sent you here must've told you what we expect from our employees, right? Good! That means we don't need to waste time training you. Though... that outfit looks nice, and that's a really nice haircut, it doesn't suit the professional air we're trying to give our customers. Now, if you can just give me your name, and I mean your ''legal'' name, on your birth certificate, I can give you your employee ID, and we can get you started on your first day! Don't worry, we'll call you by your preferred name, we just need your legal name for our records. Oh, and don't mind the dead bodies in the halls, the Bugs leave those from time to time. If you're that worried about being attacked, all our employees are outfitted with a weapon to defend themselves with; we're certain you'll never need to, though! Now that we've gotten the paperwork out of the way, here's your cubicle, and the C.E.O. should page you soon with your first assignment!

Mouth Sweet is an RPG Maker horror game with first person shooter elements, made by Mitchell Hall of L.O.V.E. Games and released in 2016. You've been assigned an entry level job working for the rather large C.C.C. Inc. by your temp agency, hoping that it'll lead to a job substantial enough that you can make ends meet. Tasks are paged to you on a PDA that doesn't send messages, it only receives them, and each job is both seemingly inscrutable in terms of what the end goal is, while also getting progressively more disturbing. Not helping things are the invisible beasts roaming the halls, dismissively referred to as Bugs by the management, which will tear you apart if you stay in the halls longer than 20 seconds. Each task requires you to go through several, featureless hallways before reaching your destination, dealing with the Bugs as you do so; either by shooting them with your revolver, which only has six shots, or by ducking into another room, which stops them from chasing you, if you can tell which doors are and aren't locked. Ultimately, if you can tolerate your demeaning boss, not ask questions, and above all, keep your ears open, you might uncover exactly what the deal is here... or at least, make enough money to quit with your life in order.

The PDA lights up and shows you your next assignment. "List examples of tropes that appear in Mouth Sweet."