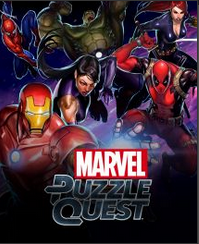 Assemble a team of Marvel’s biggest super heroes and villains and battle with Puzzle Quest’s trademark match-3 and story-telling gameplay in a game that combines favorite Marvel characters with a deep RPG leveling, player vs. player, character upgrades, and more.

In the wake of the Iso-8 Outbreak, the super hero community struggles to recover. Taking advantage of the chaos, super villains take control of National Security. Dark Reign follows these events that twist the destinies of both the heroes and villains of the Marvel Universe forever.

During a fight, your goal is to down all of three opponents on the opposite team, not unlike Ultimate Marvel vs. Capcom 3, with your own roster of heroes/villains. Level them up with ISO-8 and power up their abilities with their respective comic book covers.

Not to be confused with similar themed games such as Puzzle Quest, Jewel Quest, Puzzle & Dragons, or any other Marvel-affiliated video games.

A few real quick notes, due to the confusion that can arise such as naming the different abilities of characters.

There are 5 different ranks in the game, represented by the number of stars under a character. Each rank can be trained to a higher level than the previous one, with rank 1, or 1-star, having a cap of 50, and 2-star having a cap of 94, and further up. For each rank, a character of the same name, for example Magneto, can have two different move sets and looks. Magneto has a 2-star variant and a 3-star variant that both have different move sets, with rank-2 Magneto having better board-clearing abilities and rank-3 Magneto being more defensive. Because of this, Magneto might be described as having two moves that don't seem to relate to each other.

Currently has a page for documenting cards and events

constantly for both beginners and veteran players.

Tropes that apply to the gameplay: