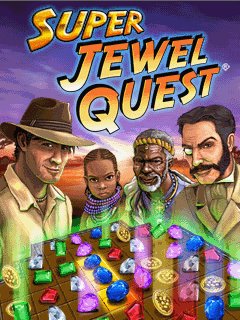 Match-Three Game as Serious Business. iWin Games' Jewel Quest series follows Adventurer Archaeologist Rupert Pack, an Indiana Jones Expy, on his research as to why so many ancient cultures in the world are obsessed with match-three games. During his travels, Rupert is to meet his soulmate and eventual wife, anthropologist Emma Swimmingly, and repeatedly crosses paths with his professional and romantic rival, the arrogant Gentleman Adventurer Sebastian Grenard.

In Jewel Quest III, Rupert and Emma's daughter Natalie is blinded by fungal spores that she unwittingly released from the unique artifact "Golden Jewelboard", and Rupert, following the clues left by a mysterious person, journeys all over the world for the cure. In the fourth game Jewel Quest Heritage, to prove that he is the rightful owner of the Golden Jewelboard and prevent it from being awarded to Sebastian, Rupert has to trace his ancestry to ... Emperor Moctezuma of the Aztecs!

The basic rule of the game is simple: When you match up three identical jewels, the underlying squares turn gold. You have to turn the whole board gold before the timer runs out. Later games add secondary goals and challenges, such as capturing "monkeys" in cages, matching "clock" jewels to refill the super-fast timer, and playing against the computer.