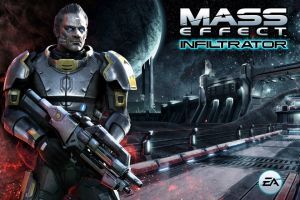 Mass Effect: Infiltrator was an iOS/Android-exclusive Third-Person Shooter with RPG Elements released as a tie-in game to Mass Effect 3. It was made by the authors of Dead Space Mobile and uses the same engine, albeit with a redesigned combat system to incorporate cover-based mechanics.
Advertisement:

The players take control of Randall Ezno, a Cerberus Operative that ends up at odds with Cerberus's plans for himself and his coworkers. Much shooting and backstabbery ensues.

The game also ties into the metagame of "Galaxy at War", allowing the players to secure intel drops (which can either be redeemed in-game for extra credits or converted to Galactic Readiness boosts for the metagame), and score Cerberus Defectors, which, like the Mass Effect 3 multiplayer soldiers, also boost the overall Galactic Readiness.

It was removed from the iOS/Android stores in April 2018.