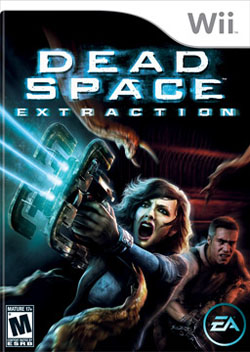 Dead Space: Extraction is a Rail Shooter released in 2009 for the Wii. Taking place in the Dead Space universe, it is a prequel to the PC, PlayStation 3 and Xbox 360 game Dead Space.

On a mining colony on the planet Aegis VII, a huge red statue is discovered on top of a pedestal. Removing the statue causes the miners to hallucinate, including Sam Caldwell, who kills several of his co-workers before getting shot by security.

A few days later, Detective Nathan McNeill has called in Caldwell's girlfriend, Lexine Murdoch, for questioning. Coincidentally, McNeill runs into his old war buddy Gabe Weller. Weller is on Aegis VII because the ship he works on, the USG Ishimura, is transporting the statue, dubbed the Red Marker. Meanwhile, Weller has been sent to investigate the bodies of the people Caldwell killed.

Their reunion is cut short when all the corpses turn into monstrous Necromorphs, and attack the colony. McNeill and Weller, along with Lexine and another person, Warren Eckhardt, try to escape to the Ishimura, only to find the Necromorphs are there too.

Extraction carries several things over from Dead Space; Necromorphs have to get their limbs shot off to be killed; McNeill and Weller can hold up to four weapons at a time, which players can cycle through on the fly; ammo is limited and has to be conserved; and weapons can be upgraded with power nodes found in the levels.

An HD version is available for the PS3, compatible with the Move controller. This version omits the unlockable motion comics, although all six issues can be downloaded on the PlayStation Network. Some editions of Dead Space 2 include Extraction HD on the disc.