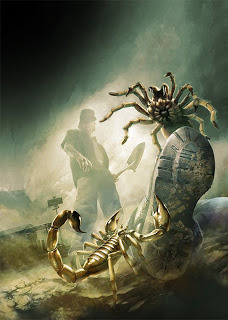 Two deadly creatures in the foreground, an even deadlier one in the back.
"And George Struggs, the cops asked him what happened before he slipped into that coma, and he kept mumbling something about deadly creatures."
—Wade
Advertisement:

Deadly Creatures is a 2009 video game developed by Rainbow Studios and published by THQ for the Wii. It goes against the normal flow of action games by ditching the standard grizzled space marine protagonists and instead starring a tarantula and a scorpion. The two arachnids are unwittingly caught up in a plot by two humans to dig up a treasure in the desert.

The game's concept came from a dream lead designer Jordan Itkowitz had about using the Wii Remote to control a snake, and eventually the idea expanded to other creatures, and in the end, only the scorpion and tarantula remained.

Did we mention that the two humans are voiced by Billy Bob Thornton and Dennis Hopper?