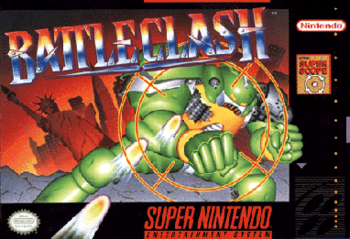 Battle Clash, known in Japan as Space Bazooka, is a Mecha-themed Light Gun Game released for the Super Nintendo Entertainment System in 1992 which supported the Super Scope light gun peripheral. It was developed by Intelligent Systems of Fire Emblem and Advance Wars fame. The player assumes the role of the gunner of a mecha ("Standing Tank", the game's preferred terminology) known as the "Falcon", as he helps the pilot, Michael Anderson, defeat the other Standing Tanks around the world in a tournament called the "Battle Game". Eventually, the player and Mike's journey take to the Moon, where they face the tournament's champion, the alien Anubis, the murderer of Mike's father.

The sequel Metal Combat: Falcon's Revenge, released in 1993, took a Sequel Escalation approach to the original game's premise. The "Battle Game" tournament in the previous game is revealed to be a front for an incoming alien invasion, which now took Mike and the player to other planets around the solar system to defeat the invaders. The sequel further refined the gameplay by adding a training stage to the beginning and a second playable Standing Tank in the form of the "Tornado", piloted by a mysterious young girl named Carol Eugene.

These games use the following tropes: