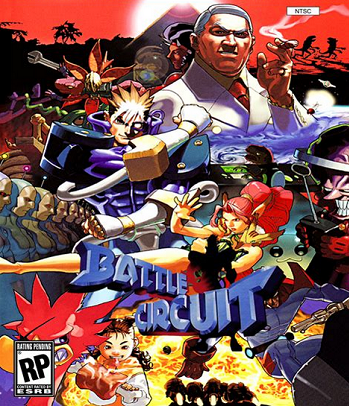 Battle Circuit (1997) is Capcom's last side-scrolling Beat 'em Up for the arcades. Sadly, it's pretty much unknown to the public, because it saw a very limited release (and it was never released in the US until it was ported as part of Capcom's Beat 'Em Up Bundle for the PlayStation 4, Xbox One, Nintendo Switch and PC in 2018) in a period when the arcade phenomenon was already waning.
Advertisement:

Set in the year of 20XX, it features a motley crew of Bounty Hunters as main characters, and it is a return to the '50s Sci-Fi-inspired settings of Captain Commando, with alien worlds, mad scientists, robots and fantastically weird character designs. Up to 4 players can join the fight, making it a very colorful, confusing and fun experience.

Another interesting feature of the game is the capability of upgrading the characters by buying new attacks, life and resistance enhancements, etc. Since the characters are bounty hunters, it makes sense that the most common bonuses are coins and stacks of cash, that can be used at the end of every level to buy said upgrades.