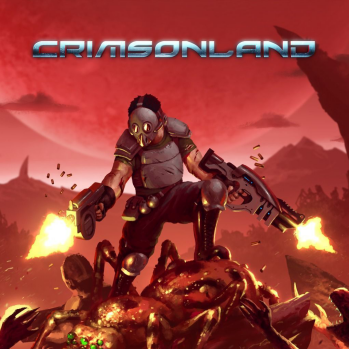 Crimsonland is a top-down Action Game, where you maneouver around a featureless plain killing aliens, zombies and other nasty things as they wander onto or teleport into the screen, and your goal is to survive. To help you, powerups occasionally spawn from slain enemies: they either give you some kind of bonus (slow motion, freeze, and so on) or a new weapon (shotgun, plasma minigun, ion rifle, etc). As you kill monsters, gain XP, and level up, you are granted "perks" that may be beneficial, or may involve some kind of tradeoff for a benefit. "Long Distance Runner," for instance, lets you run faster if you keep moving. "Death Clock" makes you invincible, but you drop dead in 30 seconds.
Advertisement:

The initial version of the game was a strictly PC shareware game, and it came out on all the way in 2003. However, an significantly updated, commercial version of the game was eventually released more than a decade later, and was ported to all the major platforms since then: Playstation 4, PlayStation Vita and mobile platforms in 2014, Playstation 3 and Xbox One in 2015, and Nintendo Switch in 2017.

The full version now includes four game modes, one of which is a secret end-game mode.

To give the game a little added longevity, it tracks high scores, both locally and on the internet.

Crimsonland is awash in: