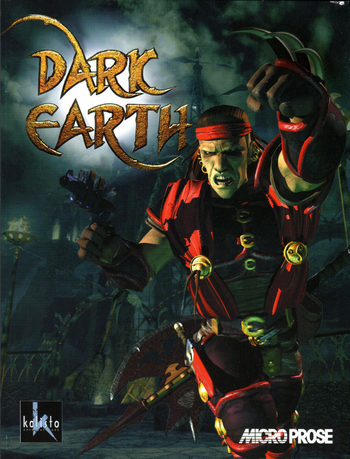 Will you bring light back to Dark Earth ?
Advertisement:

Dark Earth is a post-apocalyptic action-adventure game for PC, developed by Kalisto Entertainment and published by MicroProse. The game released in 1997, and spawned its own tabletop RPG circa 2003 (though the rpg is French only).

The game is a third-person fixed camera action-adventure game featuring polygonal characters over pre-rendered environments (think Alone in the Dark, Resident Evil, or Bio Forge) with an emphasis on melee combat.

The game takes place in a post-apocalyptic world caused by meteorites hiting the earth, destroying major cities and causing a huge cloud of dust and ashes to clog most of the sky. This prevents sunlight from reaching the ground, save for a couple of sacred spots, called stalites, where the last survivors of the human race, the walkers, built huge cities in the glory of the Sun God.

The game is set in one of those stalies, Sparta, and follows Arkhan, a guardian of fire. One day during the job, he gets infected with a dark disease after preventing the assassination of the great priestess Lori. The disease's most obvious effect is Arkhan's slow tranformation into a monster of darkness. It's then up to him to uncover to truth behind the priestess' assassination and find a cure.

Kalisto had plans for a sequel to Dark Earth but that never came out. However, in partnership with French publisher Multisim, a tabletop role-playing game based on the Dark Earth world came out in France and greatly expanded the Dark Earth setting.