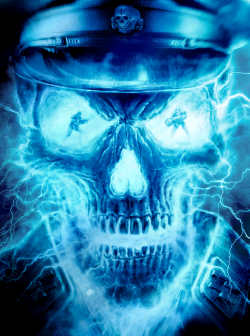 Yeah, it's like this.
"Who would dare oppose us?"
— Deathshead
Advertisement:

Wolfenstein is a First-Person Shooter using a modified version of the Doom³ engine developed by Raven Software. It's the sequel to 2001's Return to Castle Wolfenstein.

The game's plot features, once again, American super-spy B.J. Blazkowicz, in his attempts to foil a plan by the Nazis to harness the power of the Black Sun, an ancient alternate dimension which the SS are using to create all manner of Super Soldiers and monsters. Besides an arsenal of World War II-era firearms and several experimental Nazi energy weapons, B.J. is also assisted by a magic amulet that allows him to tap into "The Veil" between dimensions and harness special powers such as Bullet Time and an energy shield.

Wolfenstein takes place in and around the fictional German town of Isenstadt, and uses a partial Wide-Open Sandbox system, with the player traveling through the town, buying weapons from the Black Market, interacting with residents and members of the German resistance groups Kreisau Circle and Golden Dawn, and traveling to specific areas of the town (i.e. Warehouse, Cannery, Dig Site) to take part in story-based linear missions.

Followed by Wolfenstein: The New Order.

Recurring tropes from the series include:

Tropes exclusive to Wolfenstein include: