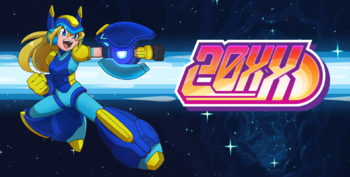 20XX is an Indie Platformer/Roguelike hybrid that takes heavy inspiration from the Mega Man X series.

Just like the X series, the goal is to make your way through each stage, discovering new powerups and abilities along the way, to fight the boss at the end. However, where X has deliberately designed stages, 20XX uses a random level generator to create a unique layout filled with new items each time you play.

The plot, such as it is, is that two Android mercenaries, Nina and Ace, have been contracted by professors Brighton Sharp and Arlan Flat to quell a robot uprising. The duo must run, dash, shoot and slash their way through 10 different levels and defeat the hordes of renegade robots, destroy their leaders, find out who is truly responsible for the attacks and, hopefully, survive long enough to get paid.

The game has seen some post-launch support. Among the free updates, some paid add-ons were released—