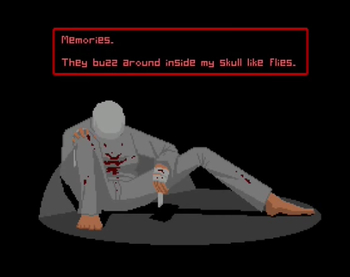 Somewhat inspired by Flashback with some System Shock thrown in for good measure, 1213 is an action-adventure platformer complete with gun combat. Not bad for a game engine specifically designed for point-and-click adventure games. The title character, 1213, manages to escape the cell in which he has lived for as long as he can remember (which isn't that far back) into something much worse.

As with the Chzo Mythos games, Yahtzee made a special edition of 1213. Originally donationware, it is now free to download

Tropes used by the game: