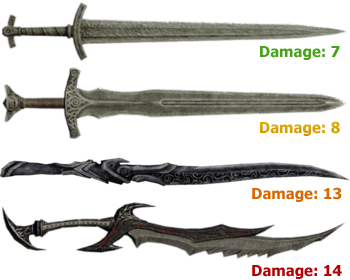 Many games rely on the concept of Evolving Weapon, alias weapons that can be upgraded and get stronger. Sometimes, they not only get more powerful, but they also become visually fancier and more elaborate, usually to better illustrate how they improved. Alternatively, the weapons you pick up become more and more elaborate as you proceed in your quest/in the game, again in order to underline their greater power. It probably makes sense, as a beautifully decorated katana with a runic blade is far more appealing than a simple iron shortsword.

Note, however, that usually the "elaborate" part boils down to just the appearance of the weapon. While the weapon itself does grow stronger, the use/attack animation/whatever is still the same.

Goes well with Bling of War which may follow the same concept of looking nicer as it gets better. May also be stretched to various Mooks who get better-looking equipment as they get stronger and stronger.

Don't confuse with Evolving Weapon. See also Ace Custom. Also, before writing remember that this is mostly about the concept of the weapon looking more elaborate as they grow stronger. Speculations and discussions about how the decorations should influence the effectiveness of the weapon are pointless.