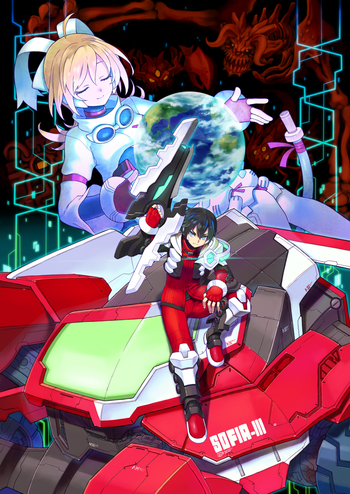 The heartwarming tale of a boy and his tank.
The girl is new.
"Mutant scum never learn! Blaster Master is back!"
—Tagline
Advertisement:

Zero (re)tells the story of Jason Frudnick, an aspiring young mechanic who lives on the planet Earth. Earth itself is currently on the path to recovery, having survived countless wars that wrought an ice age on the surface and a comet impacting the planet. It's not long until Jason comes into contact with a mysterious frog-like creature, whom he names "Fred" and brings in for research. When Fred escapes from captivity and jumps down into a strange hole, Jason, in pursuit of Fred, finds himself face-to-face with a massive battle tank emblazoned with the name "SOPHIA-III" and its mechanic, the amnesiac girl Eve. Jason soon discovers that the SOPHIA-III was designed to fight mutants who have invaded the Earth's underground, and he decides to take up arms and save the planet from the mutant invasion.