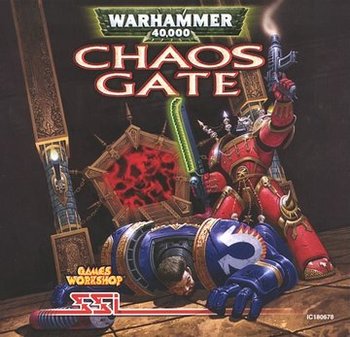 This 1998 Warhammer 40,000 game was one of the earlier PC games set in the verse and one of the more obscure.
Advertisement:

A Turn-Based Tactics game using a movement grid, each Space Marine has a certain number of action points per turn, used by shooting, opening doors, moving etc. As per the game, firing off a rocket launcher will use most of your points, while you can fire a bolt pistol and move a fair bit.

The game came with a campaign, pitting an Ultramarine force (led by Captain Krueger) against Chaos Word Bearers (under Lord Zymran). Notably in this campaign, you had a limited number of Marines (which could gain experience and improve their stats) and if they died, they were not coming back. You also only had five-man squads rather than ten.

As The Lexicanum notes

, this game came out before the third edition of the tabletop game came out, so many elements of the mechanics and backstory have been changed since then, making Chaos Gate an interesting window into how 40K used to be for modern player.

Over two decades later, a sequel Warhammer 40,000: Chaos Gate - Daemonhunters is coming out in 2022.