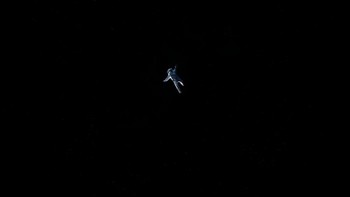 "In space, no one can hear you scream."
— Tagline for Alien
Advertisement:

There are a number of challenges associated with surviving in outer space: the current human need for oxygen, water, food, waste management, heating, as well as space's lack of gravity, being unable to hear what is going on outside, and other issues all make space life a difficult proposition. Any Casual Interstellar Travel drive requires an hour to "warm up" and is the most fragile thing on the ship. A single pebble travelling sufficiently quickly could kill you, or at least destroy one of those important life-support systems; these systems are either very-high-maintenance or require the use of an AI to keep everything under control. If you were to send a Distress Call, the nearest help would be a week away. And the interior of your spacecraft is designed to look as cold, clunky, mechanical, and minimalistic as possible — it might as well be a flashy Haunted House.

And that's when things are working correctly.

Now throw in a malevolent or malfunctioning AI that controls all of the above, or hostile aliens that you have never seen before trying to use you for breeding. But you can't go outside without taking on even more risks, such as getting a puncture in your space suit or the doors locking. Everyone but you has died, and realistically your problems cannot be solved by simply shooting them.

There aren't any other sentient beings within years of your location, but it doesn't matter since In Space Nobody Can Hear You Scream. Perhaps you can start an Apocalyptic Log so that when people do arrive, they know what you've been through and how to prevent the situation from happening again — it also allows you to talk to, and fill your days with, something, which might help prevent you from going mad from the isolation. Still, you will likely consider your slow, lonely death by maybe starvation, maybe suffocation, but probably not suicide as you don't even have the implements to end it all.

You're alone, in the cold depths of space, without hope of even seeing another human or your home before you die. You may not know if you die, because space already looks like oblivion.

For story purposes (especially in the past when hard sci-fi wasn't prevalent based on lack of knowledge) the deep sea works just as well, since it has similar conditions for survival and similarly severe risks for going outside. In some ways it is worse, given how any people that could help are no more than a few miles away, but usually cannot be contacted.

Functions by means of Enclosed Space and the Closed Circle. If the isolated people are instead focussing on their insignificance or the deep vastness of an unknowable universe, it's a Cosmic Horror Story — the two can overlap.