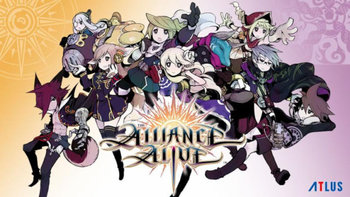 The Alliance Alive is a 2018 Eastern RPG for the Nintendo 3DS, created by FuRyu and published by Atlus in the US. An HD remaster was released on October 8th, 2019 for Nintendo Switch and PlayStation 4, with a PC version to follow in 2020. The Alliance Alive serves as a Spiritual Successor to 2015's The Legend of Legacy.

The story follows a group of characters as they mount a rebellion against a race of Daemons that have ruled over humans since blotting out the sun a millennium before. Gameplay follows many traditions of the Japanese role-playing genre, including turn-based battles and navigation using a world map, but also several differences, most notably the absence of experience points and levels and the combining of revival effects with regular healing.

The Alliance Alive contains examples of: