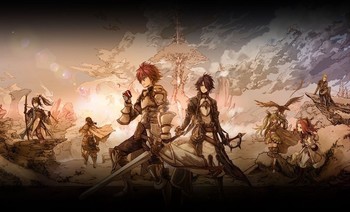 "For Whom The Alchemist Exists" note From left to right: Akame, Kamui, Logi, Dias, Tina, Lisbeth, Edgar
"We were always together.
Spending our time together.
Having the same dreams.
Falling in love with the same person.
Laughing together-Crying together.
We shared both joy and sadness.
Because we had always been united in our hopes.
Yet, a day would come when our paths would diverge."
—The Opening Prologue spoken by two of the main protagonists, Logi Crowley and Dias Crowley
Advertisement:

A long time ago in the continent of Babel in which the Tower of Babel stands, two siblings; a brother named Nimul and the sister named Emmel invented the Art of Alchemy in order to reach their ambition to become gods. However as a result, humanity itself was in danger due to the exploitation of Alchemy as a tool of war, nearly pushing themselves to the brink of annihilation. Seeing the threat to mankind and it's devastating powers, the Kingdoms of Babel formed the alliance of the Seven Kingdoms in which it was headed by a state called Northern Pride. As a result, Alchemy was branded as a forbidden art. A delicate balance and peace followed, being maintained by the Seven Kingdoms for several centuries.

However in the year of 911, the tenuous peace crumbled when the Western Kingdom, Wratharis revived alchemy again as an instrument of warfare. And as a result of their actions, the remaining Kingdoms formed a United Suppression Army, with Envylia as their vanguard. the Kingdom of Wrath was dissolved and Alchemy as a weapon of war was once more, sealed away.

Twenty years later, things began to change. As the forbidden seal of Alchemist begins showing signs of weakening, signalling an eminent foreshadowing of what's to come. And as a result, 7 heroes from different nations are called for this epic journey; Logi Crowley and his half-brother Dias Crowley from Envylia, Edgar L. Leonhart from Slothstein, Lizbeth Finn from Lustberg, Tina from Saga Region, Kamui from Desert Region and Akame from Wadatsumi.

The game was created and published by Fuji Games (Phantom of the Kill), with a global version via Gumi Inc. (Brave Frontier, Chain Chronicle). The Alchemist Code offers turn-based tactical RPG combat with a 3D isometric view and animations, plus Visual Novel style cutscenes featuring voice acting from Natsuki Hanae, Kaito Ishikawa, Yōko Hikasa, and others. New playable units are obtained via a gacha system, which in addition to original units from the game's story also periodically offers crossover events featuring titles such as Fate/stay night, Disgaea, and so on. It also offers multiplayer elements such as co-op missions as well as an Arena mode to pit your best team against another player's defending squad.

An anime film adaptation produced by Satelight with Shoji Kawamori as the general director has been announced for a June 14, 2019 release. It takes place a few years into the events of the game, when a high school student named Kasumi Nagasaka is suddenly transported to the continent of Babel, where she encounters the game's protagonists.

This game transmutes the following tropes: