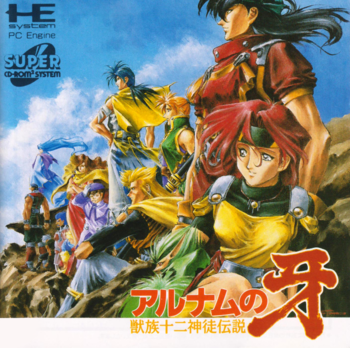 Alnam no Kiba: Juuzoku Juuni Shinto Densetsu translation Fang of Alnam: Legend of the Twelve Beast Tribe Apostles is a Japanese video game developed by Right Stuff. It was first released as an RPG for the PC Engine in 1994. It was later remade as a visual novel for the PlayStation in 1996. Neither version of the game has been released outside Japan or translated.

The story takes place in a land ruled by the Pure Capital of Seito, in which humans coexist with twelve beast tribes. Beastmen are normally identical to humans but have the ability to transform into anthropomorphic animals forms. Beastmen are subject to intense discrimination from humans, being viewed as lesser and disposable. These lands have come under attack by strange creatures called shishimura. The government in Seito was content to not do much about the shishimura when they mostly attacked beastmen villages, but as the monsters have become more aggressive and numerous, reports from human villages have become more common. To combat this, the capital has called for each beast tribe to send a representative to act as defenders for the human cities.

Kenbu is a teenage beastman from the Shutsu Tribe who is training to be a warrior to avenge his parents who were killed by shishimura. His first experience in real combat goes wrong when his mentor Ouken is mortally injured protecting Kenbu from a shishimura's attack. Ouken was to be the representative for the Shutsu, and with him gone Kenbu volunteers to take his place. Filled with uncertainties about the relation between humans and beastmen, the origin of shishimura, and his own place in the world, Kenbu throws himself into his new duty to fight the shishimura.

The game later received a sequel on the PlayStation in 1997 called Alnam no Tsubasa.

Alnam no Kiba contains examples of: