Everybody loves the word "vacation!"
The Expository Theme Tune 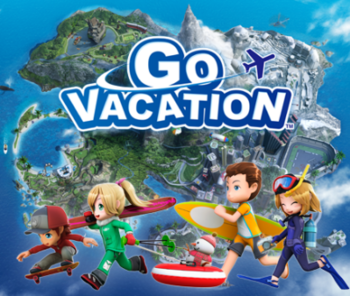 Go Vacation! is a 2011 video game for the Wii, developed and published by Bandai Namco Entertainment games. It starts from the basic formula created and codified by Nintendo's Wii Sports series: simple-but-engrossing minigames, largely controlled through the motion functions of Nintendo's Wii Remote.

Then in drops them into a massive, sprawling, open-world experience not unlike the Grand Theft Auto series. Then it adds a touch of Animal Crossing and calls it a day.

Suffice to say, this is not your average minigame collection.

Set on the beautifully idyllic island of Kawawii, you take on the role of a traveler with only one goal: To have as much fun as possible before your vacation ends! The game is split up into two main parts. The first, the Resorts, are four enormous Hub Worlds that you can explore, either on foot or with specialized "Gear" like ATVs, kayaks, and skateboards. These are full of places to explore, hidden treasures, mini-missions, NPCs, secret messages, photo ops, and even pet dogs. The second part is the Activities within the resort. These are the actual mini-games, and can cover everything from sports like volleyball and minigolf to weirder things like glass-harp-playing and pie-throwing. Finally, there's an unlockable Villa that you can design and decorate to your liking.

In 2018, the game received an Updated Re-release on the Nintendo Switch.