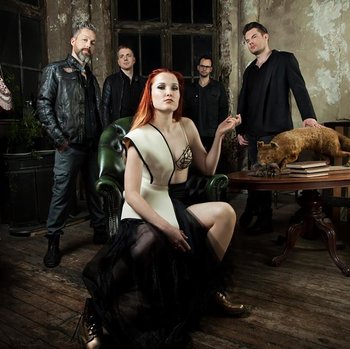 Nemesea (the last 3 letters is pronounced like the English "sea") is an Alternative Rock band from Groningen, The Netherlands, who seem to like to undergo Genre Shift whenever they release an album. Founded in 2002 by Henrik Jan de Jong, Manda Ophuis, and Sonny Onderwater, Nemesea first rose to the Symphonic Metal scene after supporting After Forever, and released their first album Mana in 2004.

Following major label talks and funding from Sellaband.com, Nemesea then shifted to full-blown electronica with their sophomore effort In Control, out in 2007, followed by the immersive live album Pure Live @ P3. Signing on with Napalm Records before the end of the decade, the band went Darker and Edgier bringing to fruition their 2011 effort The Quiet Resistance, featuring guests from bands Maerzfeld, Bulletproof Messenger, and Delain. Five years later, Uprise, a Lighter and Softer album against its predecessor, was released, with bonus reworks of some of their old material.

In that same year, Manda left the band to focus on teaching. Nemesea promptly started a search for a new singer via social media and found Sanne Mieloo (of Grandview Avenue and Guinevere), who debuted with the band in their 2017 single "Dance in the Fire" which reappeared in the band's fifth full-length album White Flag, released in 2019.

Tropes in the fire