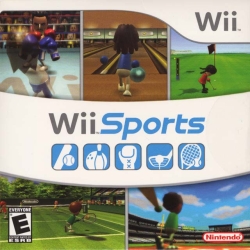 You've probably already heard about Wii Sports. If you're not into video games, then you probably heard the media, getting it wrong as they always do, referring to it as the Wii itself, not making a distinction between the game and the system that comes with it (but being bundled with the system doesn't help). If you are into video games, you of course already knew about it. And no matter who you are, you've probably already played it.

But for those of you who haven't, here's a rundown. Wii Sports is a game that originally came bundled with the Wii system (except in Japan). It's five simplified sports in one game, and it's dependent on the Wii's motion sensitive remote-shaped controller.

While Wii Sports is looked down upon by certain fanboys for its lack of depth (but for something like this, is a plot really necessary?), but for the motion sensing features of the controller and what it has done for video games, it has caused a big ripple effect that's still being felt today. Its easy-to-understand, pick-up-and-play nature has allowed people who don't play video games to get into it. Retirement centers are buying Wii systems for the elderly to use, and use them they do. It's become the one video game that can be easily demonstrated to someone else when they ask you "why do you play video games? What makes them so fun?" Of course, by demonstrating a simplistic sports game, you're failing to capture the appeal of more complicated games like The Legend of Zelda. But, much like Dragon Ball Z and Sailor Moon were the "gateway drugs" for anime fans, Wii Sports is the same for video games.

Not surprisingly, Wii Sports also has the secondary effect of being associated with the Wii itself. Whenever elderly talk about "the Wii", they only mean "Wii Sports". They don't mean Excite Truck, Super Mario Galaxy, or even Super Smash Bros. Brawl. The Wii has become synonymous with Wii Sports, and the general, non game-playing public won't bother to correct this mistake. Slightly more savvy players will likely simply refer to each game in the package as "Wii (insert sport here)".

The game seems to have spawned a series of games that is typically referred to as the "Wii series", games that are all named Wii "(insert something here)", that focus primarily on using Miis to play games, such as Wii Play, Wii Music, Wii Fit, Wii Party and a true sequel, Wii Sports Resort that uses the newly introduced Wii Motion Plus accessory for more advanced control. Wii Fit, Wii Sports Resort, and Pilotwings Resort all feature Wuhu Island as their main setting. Wii Sports also got its own Updated Re-release on Wii U under the title of Wii Sports Club, which added online functionality and refined Wii Motion Plus control. It launched on November 7, 2013 as a downloadable game, then later on July 25, 2014 as a retail game. The downloadable version offers the ability to either permanently buy each sport separately, or rent the whole package at once for one day.

A new iteration for the Nintendo Switch was released on April 29, 2022 titled Nintendo Switch Sports. Bowling and Tennis both return, alongside Chambara from Resort along with Soccer, Volleyball and Badminton as all-new sports. In addition, Golf has been confirmed for inclusion in a post-release update. Baseball and Boxing are not included in the game.

Each of these games has three different practice games with various relations to the actual sports; the second and third of each sport are unlocked if you play the practice game before it. And there is a "Fitness Test".