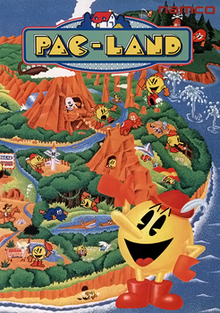 In 1985, one of the most famous platformers, Super Mario Bros., was released. It became one of the most important games in history, but few knew about the inspiration for it. Released in 1984, a year earlier, was a video game from the Pac-Man franchise titled Pac-Land.

It was the Trope Codifier to the 2D platformer style of game. Partly created to tie-in with the Hanna-Barbera cartoon, the American version featured designs for characters based on the cartoon, with all versions also including the show's theme music. The Japanese version gave Pac-Man the appearance of previous games' arcade cabinets, but Ms. Pac-Man and Baby Pac were given original designs to match. The designs are still used to this day. By extension, it was the first game to have Pac-Man use his character artwork in-game. Most re-releases would be based on the Japanese version.

The story was very basic, as it depicted Pac-Man helping a lost fairy princess named Buttercup return to Fairy Land, with Pac-Man's Ghostly enemies trying to get in the way. And this time, they've got an armada of vehicles.

Pac-Land, as a location, would continue to appear in later games such as Pac-in-Time and Pac-Man World 2. The game also served as the inspiration for some of Pac-Man's moves and a stage in the Super Smash Bros. series.