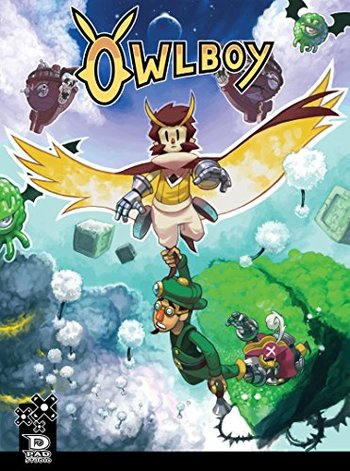 . It is a platformer with a mixture of action and puzzles, starring a young owl named Otus, and his various Gunner partners. It is notable for many things: its absolutely beautiful pixel art, interesting concept, and staggering 9 years of development time which began in 2007. The game was released on November 1, 2016 for PC, with a Nintendo Switch port launching on February 13th, 2018, and PS4 and Xbox One versions following on April 10th, 2018.

The story kicks off when Otus's village of Vellie is attacked by Sky Pirates, led by Captain Molstrom, who steal an ancient Artifact of Doom. Otus and his friend Geddy enter into hot pursuit of the pirates, and end up entrenched in a mystery that reveals much about their World in the Sky and the Owls, an ancient race of mystical precursors.