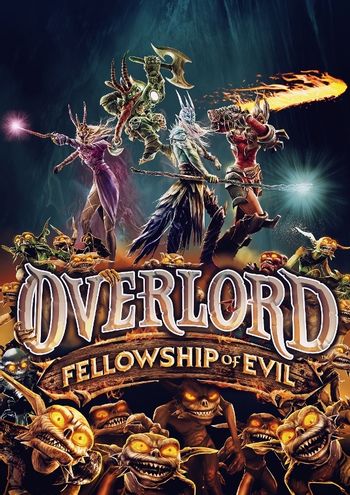 Overlord: Fellowship of Evil is a multiplayer dungeon crawler Action RPG spin-off of the Overlord series made by Codemasters and released on October 20, 2015.
Advertisement:

After the fall of the last Overlord, the world has begun healing from the carnage and ruin caused by his reign, much to the concern of Gnarl and the Minions. Seeking a new Overlord, they decide to revive four dark champions as Netherghúls and put them through the Trials of Evil as they rampage through the lands and stop The Golden from cleansing the lands:

The game takes a Genre Shift towards co-op multiplayer RPG gameplay, though Minion control returns in a limited fashion.